Philomé Obin (July 20, 1892 – August 6, 1986) was a Haitian painter. He was arguably the greatest of all Haitian artists—his main rival for that accolade is fellow painter Hector Hyppolite.

Philomé Obin was born in Cap-Haïtien, the third child of Mr. and Mrs. Obénard Obin. He received rudimentary instruction in drawing as a boy and produced his first known painting in 1908. He was still working at his art three-quarters of a century later.

Most of the paintings of Obin’s first half-century—often on cardboard, sometimes on Masonite—are lost. They were, in any event, unappreciated by middle-class Haitians who preferred works that aped French paintings; they did not value Obin’s representations of Haitian street scenes or his visions of Haitian history. The celebrated artist also painted murals and other decorative pieces for commercial establishments, fraternal organizations, and Protestant chapels in the beginning. (In a country sometimes described as "80 percent Catholic and 100 percent voodoo"—voodoo means "spirit", given its West-African origin—Obin was a fervent Baptist, who did not find the practice of voodoo appealing. He had, however, flirt with occultism through the Freemasonry. As the 20th century neared its midpoint, Philomé Obin had never earned enough money for any of his work.

By 1944 the artist was in despair. "Dear God," he wrote on a small blackboard in his home, in Cap-Haitian, "the year 1944 was a bad one for Philomé Obin. Please make 1945 a better year for him." He had reason for hope. Word had reached him of the opening, earlier in 1944, of a Centre d’Art in Port-au-Prince, Haiti's distant capital. The Centre had been established by Dewitt Peters, an American Quaker and conscientious objector who had been sent to Haiti by the U.S. Office of Education as an alternative to World War II military service. Seeing the imaginative works that decorated many voodoo temples, or ounfò (French: humfor), Peters, also an artist, suspected that the country harbored much talent waiting to be discovered. He resolved to find and promote it.
Front cover of the political satire book, "Bakoulou" [The Con Man], given to Philomé Obin and signed by his good friend and fellow painter, Dewitt Peters, an American Quaker
Dewitt Peter's signature on the inside cover of the "Bakoulou" [The Con Man] book, given to Philomé Obin

Philomé Obin sent Peters, at the Centre d'Art, a small painting extolling U.S. President Franklin D. Roosevelt for ending the 1915–34 American Occupation of Haiti. Peters immediately recognized Obin’s genius; the small payment he sent the artist was by far the largest Obin had ever received. (Obin would later paint at least three other paintings of FDR, one showing him with Winston Churchill and Joseph Stalin, another of an angelic Roosevelt "interceding in heaven for the unity of the Americas.") The two men—Peters and Obin—would become good friends over the years.

Selden Rodman, a Peters's associate, visited Obin at his residence in Cap-Haïtien. Now, with his 1944 prayer answered, Philomé sent painting after painting to the Centre d'Art. Soon his fame was such that both art-lovers and souvenir-hunting tourists were seeking him out. His prices rose steadily; by the 1970s he—who had sold works for a paltry sum—was painting only on commission, asking and getting $1,000 to $3,000 for paintings the size of 20x24 inches.

Among the works of Philomé’s first four decades that have survived is Vision de l'Artiste Philomé Obin pendant la nuit du 15 au 16 Janvier 1948. (He never sold that painting, which graced his living room until his death.) It shows a lovely mulatress seated on a boulder in a mostly barren landscape. Many have erroneously interpreted this painting, contending that it represents "Maîtresse Zulie", a voodoo goddess. The reality is that Obin’s dream was so vivid that he decided to capture it on his canvas, this he explained to this editor in 1983. He added that he found amusing the aura created by pundits around this particular painting. Like most of his paintings, it bears both his boxed signature and its title, in neat letters centered toward the bottom of the work.

Some have seen a white woman, a blond, in that painting and have commented that "that old man never saw a blond he didn't adore." This is a gross distortion of reality. Furthermore, if the artist has painted a "kitschy bust of a blond [standing] on the balcony just outside the studio of his large, airy, and final home," it is simply to capture with his masterful strokes the "clients", as he liked to call Americans and others, who have visited him. Unfortunately, he did not paint Mrs. Jackie Onassis or President Léopold Sedar Senghor, or even Alfred Métraux, who paid him a visit in the late 1970s. Those who knew this artist very well, found him to be impenetrable, at times. For example, it was not until after his death that his children discovered in his safe some documentation which stated that he was a commissioned officer—a Captain in the Haitian army before the American Occupation.

Philomé Obin always celebrated his birthday with fanfare, saying that on that date—July 20—he almost lost his life during one of the numerous Haitian "revolutions." Strapped on a pole, with soldiers in front of him, ready to shoot, he was saved by an officer who came on the scene and had recognized him. The officer ordered the soldiers to release him immediately because, as he put it: "Philomé Obin does not get involved in politics!" Thus, his birthday was a thanksgiving celebration: "I must thank God for sparing my life," he used to say.

Sometimes called a “sophisticated naif,” Philomé had an imperfect sense of perspective. If his use of perspective was often suspect, Obin’s work was always enchanting . His allegories are potent and carry strong messages. One of his paintings, “Trois générations,” illustrates this point very well. In the painting Obin shows three individuals with different types of vestments who represent, each, their own period. He wrote as usual at the center bottom: “Avant l’occupation, durant l’occupation, après l’occupation” [Before, During, and After the American Occupation]. With the last person casually attired in the painting, it is clear that the painter wanted to demonstrate the American influence in Haiti. Although some people have qualified some of his works as "static," his craftsmanship is always delicate and precise, and the detail in his works is nothing but astonishing. He avoids the glare. His colors are muted, unlike those of most Haitian painters outside the northern part of the country.

In the north itself, Obin’s influence was so powerful that subtle coloring is a leading characteristic in the works of hundreds of artists that he himself had trained and many others he hadn’t. Among painters of the “Cap-Haitian school,” his brother Sénèque (1896–1972) is also a major talent; several of Philomé’s children like Antoine Obin, Télémaque Obin, grandchildren such as Claude Obin, Michaëlle Obin, Henry-Claude Obin, Harisson Obin, Donald Obin, and nephews and nieces are also accomplished painters.

In 1919, Obin lived through the “crucifixion” of Charlemagne Péralte, a Haitian patriot who had opposed the American Occupation of Haiti. Betrayed by a friend, whose family name was Conzé, Péralte died in an ambush set by the U.S. Marines. His body was brought to Cap-Haitian, strapped to a door. It was displayed for several days under the hot tropical sun like a trophy in an effort to discourage further resistance. Though Obin hadn't witnessed the “crucifixion,” he honored Péralte as a hero because Charlemagne stood against the American Occupation. His renditions of Péralte’s defilement and of his funeral are powerful works that reflect Philomé’s nationalist pride. (He painted at least two versions of the “crucifixion,” and his granddaughter, Michaëlle, has painted an allegorical scene showing Obin mourning in front of Péralte’s corpse.)

The Roman Catholic archbishop’s refusal to allow Haitians to adorn his cathedral—a decision he later regretted—resulted in what may be the summit of naif art. The murals by Obin and other artists make Sainte Trinité—the Episcopal Cathedral in Port-au-Prince—one of the highlights of any visit to Haiti. (“Thank God!, they painted Haitians,” the Episcopal bishop exclaimed when he saw the first completed murals.) Philomé labored for many months on his masterpiece, Crucifixion, the centerpiece of three murals that rise above the high altar. Philomé was justifiably proud of what many consider his greatest work. He much disliked Port-au-Prince, however, and rarely visited the Haitian capital after his masterpiece was finished.

In his life outside art, Philomé Obin was a bit of a lothario. The painter was married twice, however. His first wife, the love of his life, Félicia Félix Obin, died very early. He had a daughter by her. This child who is now 85 years old (2006), never knew her mother, unfortunately. Philomé would later divorce his second wife, the mother of Antoine and Gérard Obin. Nonetheless, like many Haitians of his time, he had children by several other women

In the early 1980s, Philomé decided to visit the capitals of Europe, with the United States as his last stop. Passing through New York, he visited some of his old acquaintances. At City College, he was honored by his African American congeners. On that day, Mrs Rosalind Jeffries, of the Museum of Modern Art, talked about him with meritorious and lofty terms. This editor served as his interpreter on that memorable occasion. Before he returned to Haiti, he told this editor that his only regret was that he hadn't taken this trip earlier: "I'm too old now, I won't be able to do it again." He would die in 1986.Two decades after his death, works by Philomé Obin are sometimes available at galleries in Port-au-Prince, Santo Domingo, Sotheby's in New York, and elsewhere throughout the world, including the Internet. Prices typically range from $40,000 to $100,000 and more. 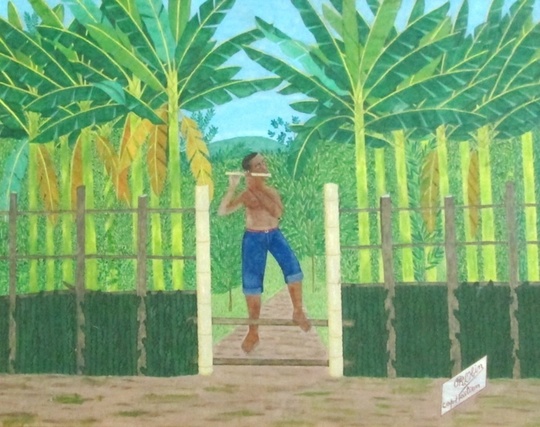