Lafortune Felix was born in Pont-Sondé, Haiti in 1933 and died in 2016. He started to paint in 1974 after he was encouraged to do so by Pierre Monosiet, who was at that time the director of the Musée d'Art Haitien du Collège St Pierre. He was one of the last great painters from the Artibonite region.

His artwork has been shown at many exhibits worldwide among them in Haiti, Europe, Canada and the USA. In 2012, it was part of the Nottingham contemporary exhibit, “Kafou: Haiti, art and Vodou” organized in England. He generously donated his artwork to raise funds for the repair of the Musée d’Art Haitien du College St Pierre.

Felix draws his content from his knowledge of and concern with the supernatural. His self-assured, forceful personality and the power of his vision endow his work with an intensity akin to that of Hector Hyppoliteâ€™s. Very temperamental by nature, Felix portrays highly active scenes. There is drama and breathless wonder in his dynamic brushwork. His preference for strong color betrays the origin of his pictorial perception: the need and desire to impress the worshipper as well as the loas. 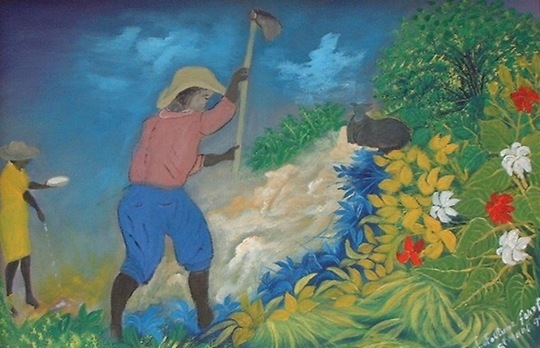