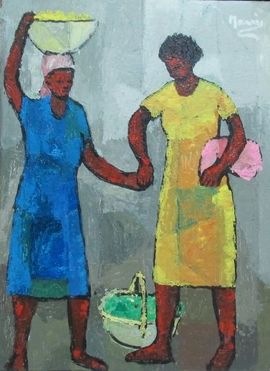 Descollines Manes was born in Petit-Trou de Nippes in 1936. He spent his childhood in the province in the hills where his father was a small farmer. At the age of twelve, he comes to Port - au Prince and lives with Angélique Barbancourt, daughter of the famous Labbé Barbancourt rum Distiller. For five years, he learned to read and write only, after the hard hours of domestic work. At seventeen, he started an apprenticeship as a bricklayer. In 1958, at the age of twenty-two years, he made his entry into the world of the arts through Gérard Résil, then Director of the S.N.A.D. (national society of dramatic Art), who invited him to attend rehearsals and theatre performances..
Thus, model for art classes, he becomes pupil following courses of drawing and watercolor with Dieudonne Cedor as teacher . In 1961, he enrolled in a painting class organised by Luckner Lazard at the Centre of secondary studies of Turgeau. This is his first experience with oil paint. Thereafter, he continued to paint with Gallery Brochette ‘s artists. In 1962, he got sick in the stomach, and he gave up the brush. In 1965, he starts to paint again and participates in the exhibition "Salon Esso" of the Haitian-American Institute. Still ill, he worked sporadically home commensurate with its often-precarious ways, sharing between his art and his job as a bricklayer that gives him some income for the purchase of his canvases, brushes, and colors. With Tiga of Poto-Mitan and his cousin Emmanuel Joachim, he engages in ceramic art.
His cousin encouraged him not to give up painting and suggests him to exhibit his paintings at the Gallery Monnin. It was in 1969 that he shows up with a few paintings.
If we observe Manes, we detect a deeply human spirit. Tired of revolt, he will substantially settle down his painting and somewhat mitigate his visceral side in favor of an expression where the search for beauty and sometimes even the truth counts more than the testimony. He played smartly but reluctantly. Sometimes, he grieves us a painting where everything reveals loneliness, lack of communication. Then, the next day, he works at a high, beautiful, moving maternity. Manes, was quiet but never serene, He was wise and superstitious. Single Manes... always alone! In 1976, he moved in Port Salut in the South of the country where in serenity of nature, he seems to have found inner peace. But after realizing that he was allergic to any form of paint, he commits suicide in 1985. 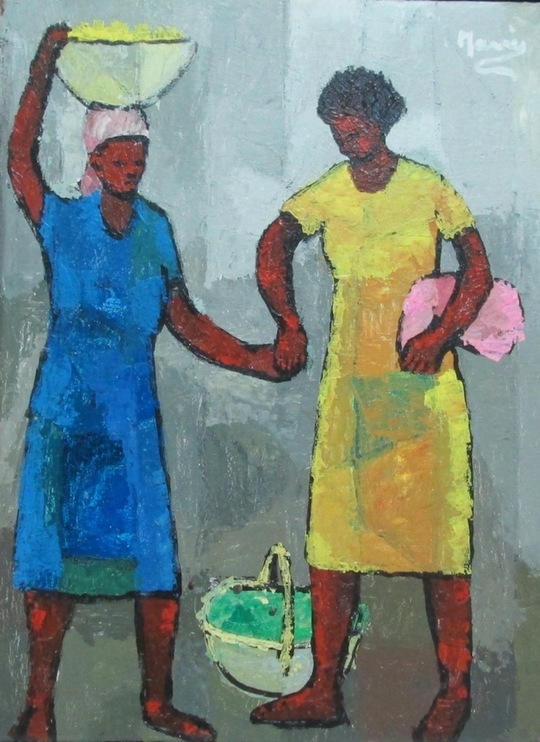